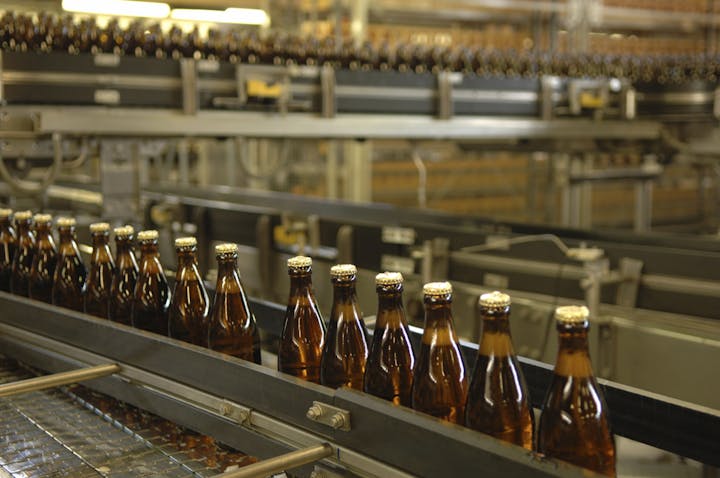 "With the SATO printers, we no longer have to worry about prolonged interruptions, as SATO’s CL408e model integrated well into our network. If a label printer were to fail now, there would be virtually no downtime. Staff can fall back on any other SATO printer in the network and print the barcode labels on whichever nearby network printer they wish.”

When asked why the German brewery Bitburger Brauerei decided to use label printers by SATO, Herbert Dahmen, IT Project Coordinator at Bitburger, simply answers by stating three qualities: “Versatile, fast and reliable.” These are the criteria the label printers had to meet that were to replace the old labelling system at Bitburger Brauerei, both in the laboratory and in production. In terms of meeting these three requirements, only the SATO CL408e printer was able to satisfy Bitburger’s IT experts. “Our old printing systems may still have been relatively reliable, but they weren’t fast enough and certainly not versatile enough. For example, they had a normal printer connection that ultimately made only one local connection possible through one single computer,” comments Dahmen, and goes on to describe the problem: “If a printer broke down, a replacement had to be found quickly. The outputs of all printers add up to a print volume of roughly 3,400 to 6,800 labels per day. This means that printing stoppages would place an enormous burden on operations. With the SATO printers, we no longer have to worry about prolonged interruptions, as SATO’s CL408e model integrated well into our network. If a label printer were to fail now, there would be virtually no downtime. Staff can fall back on any other SATO printer in the network and print the barcode labels on whichever nearby network printer they wish.”

SATO’s barcode label printers are now being used at the Bitburger laboratory to apply labels to Petri dishes, flasks and test tubes. “Bottles containing beer samples are labelled at production level, too. It’s tremendously important for examinations and quality controls that barcode labels are applied to the containers to ensure unambiguous allocation,” IT Project Coordinator Dahmen emphasizes. The brewery distinguishes between two different label types. There are the so-called “sample labels;” the only information they contain is the barcode with the sample number. Other labels, which have a barcode with information on the sample number and identification number of the respective analysis, are referred to as “parameter labels.” With this system, once the barcode has been read using the hand scanner, the laboratory or production employee is automatically led, in the laboratory data system, to the place where the analysis values are to be input.

The previous label printers were not flexible in terms of their possible use due to their limited interface selection. This is to say that every computer in the production and laboratory area of Bitburger Brauerei could print only on the printer that was connected to it locally. In the past, this sometimes resulted in the fact that, when a printer was down, printing processes were inevitably held up. The solution was obvious to IT Project Coordinator Dahmen: the old label printers had to be replaced by network-compatible label printers. An equally important aspect for Dahmen was that the same printers were installed in both areas. “It would not have made a great deal of sense for our project to merely replace individual printers. To enable staff members to access the individual printers in the production or laboratory area from any workplace, it was important to integrate identical printer models into the network. This will also eliminate the occurrence of driver problems in the future and guard against possible incompatibilities. For a company the size of Bitburger Brauerei,” IT Project Coordinator Dahmen points out, “trouble-free operation is of outmost importance.”

Founded in Bitburg in 1817, Bitburger is today one of Germany’s biggest beer manufacturers with an output of more than 4 million hectoliters per year. The Bitburger Brauerei company belongs to beverages group Bitburger Getränkegruppe. Besides the producers of Gerolsteiner mineral water, the Bitburger Holding GmbH combines renowned breweries such as König, Köstritzer, Licher and Wernesgrüner under one roof.

One of the foremost criteria in deciding to introduce new label printers was the possibility of using the Bitburger Brauerei network as printer interface. Dahmen and his team had previously tested a number of models from other providers and found that they reacted with long response times in the network. “Obviously, this was not acceptable. For us, network compatibility and speed must not rule each other out. That’s why we asked Mr Bollenbach at WWP to select a new network compatible industrial printer,” the IT expert explains. WWP GmbH from Rheinbach specializes in tagging and identification systems, and is an authorized partner of SATO. Given the positive experience he had with SATO over many years, WWP’s Managing Director Guido Bollenbach decided to propose the CL408e model to Bitburger Brauerei. Bollenbach justifies his recommendation by the fact that SATO’s printers are equal to industrial requirements in many respects: “Various factors argue in favour of this choice. For one thing, SATO printers are special printers that are extremely robust and reliable. For another, they are equipped with a fast processor that ensures rapid data processing and therefore a high printing speed. What’s more, the SATO CL408e offers so many interfaces that it can be integrated into just about any environment – simply perfect for Bitburger Brauerei.”

Before WWP delivered the 17 printers, tests had to be run to determine whether the SATO CL408e model could be easily integrated into the network at Bitburger Brauerei. A pilot installation was carried out. “We initially delivered one label printer. A SATO technician was on hand to install the printer in the Bitburger network and instruct staff members,” says WWP Managing Director Bollenbach. The installation was followed by exhaustive tests that were conducted by Bitburger’s laboratory and production employees over four weeks. “We wanted to be absolutely sure, and tried out everything,” explains Bitburger’s IT specialist Dahmen. “This involved printing on the most varied of labels. We experienced no problems whatsoever. But if a question did pop up, Mr Bollenbach and SATO were there to provide the necessary assistance. In the end, we were more than satisfied with the SATO printer.

“WWP supplied the 17 printers very quickly. We had the industrial printers on the premises in just a few days. But we replaced the old printers with the new SATO models successively. A number of preparations had to be made involving the LAN connections within the production plant. When the printers were delivered, not every workplace had a network connection.” Thanks to the extensive network preparations it was possible to equip the laboratory with the CL408e printers very quickly. In production, by contrast, it took roughly five weeks to integrate the new label printers. Since then, five of the label printers are in operation in the laboratory and twelve are used in production. WWP Managing Director Guido Bollenbach himself conducted an afternoon training session and explained all that needed to be known about handling the SATO CL408e model. “One can really tell that the employees of Bitburger are highly qualified. It only took us a few hours to explain the functions and possibilities of the SATO printers to the laboratory and production staff”, reports Bollenbach.

Everyone concerned at Bitburger Brauerei is certain that a more flexible and efficient mode of operation was made possible by the network integration of the 17 SATO printers. With this optimal solution, the brewers are now ready for any failures of individual printers that might occur. IT Project Coordinator Dahmen sums up as follows: “If, contrary to expectations, there was a stoppage because a label printer failed, another SATO label printer would simply take its place. It is no longer necessary to replace the printers straightaway, with the result that no downtime arises. What’s more, the high-speed data processing that the network printers offer ensures faster operation processes. It’s just what we want – versatile, fast and reliable.”