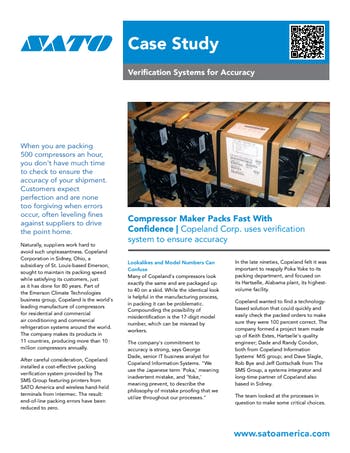 When you are packing 500 compressors an hour, you don't have much time to check to ensure the accuracy of your shipment. Customers expect perfection and are none too forgiving when errors occur, often leveling fines against suppliers to drive the point home.

Naturally, suppliers work hard to avoid such unpleasantness. Copeland Corporation in Sidney, Ohio, a subsidiary of St. Louis-based Emerson, sought to maintain its packing speed while satisfying its customers, just as it has done for 80 years. Part of the Emerson Climate Technologies business group, Copeland is the world's leading manufacture of compressors for residential and commercial air conditioning and commercial refrigeration systems around the world. The company makes its products in 11 countries, producing more than 10 million compressors annually.

After careful consideration, Copeland installed a cost-effective packing verification system provided by The SMS Group featuring printers from SATO America and wireless hand-held terminals from Intermec. The result: end-of-line packing errors have been reduced to zero.

Lookalikes and Model Numbers Can Confuse

Many of Copeland's compressors look exactly the same and are packaged up to 40 on a skid. While the identical look is helpful in the manufacturing process, in packing it can be problematic. Compounding the possibility of misidentification is the 17-digit model number, which can be misread by workers.

The company's commitment to accuracy is strong, says George Dade, senior IT business analyst for Copeland Information Systems. "We use the Japanese term 'Poka,' meaning inadvertent mistake, and 'Yoke,' meaning prevent, to describe the philosophy of mistake proofing that we utilize throughout our processes."

In the late nineties, Copeland felt it was important to reapply Poka Yoke to its packing department, and focused on its Hartselle, Alabama plant, its highestvolume facility.

Copeland wanted to find a technologybased solution that could quickly and easily check the packed orders to make sure they were 100 percent correct. The company formed a project team made up of Keith Estes, Hartselle's quality engineer; Dade and Randy Condon, both from Copeland Information Systems' MIS group; and Dave Slagle, Rob Bye and Jeff Gottschalk from The SMS Group, a systems integrator and long-time partner of Copeland also based in Sidney.

The team looked at the processes in question to make some critical choices. Of chief importance was to verify what was packed without slowing down the workers. "Our packing team only has a few seconds to select a compressor from the end of the conveyor, hoist it into the skid it belongs in, install the cardboard packaging items, apply shipping labels, move it to the shrink wrap machine, and then to the shipping department. The pace is fast, the compressors are heavy, and everyone knows that nothing can stop the line," says Dade.

The project they outlined had two phases. One converted Copeland's batch label printing system to an on-demand system to create "nameplate" labels for each compressor as it is picked. The other implemented the pack verification system using bar code scanning, label printing and software developed by The SMS Group. By printing nameplate labels only as needed, workers could pack skids more efficiently and not, for example, have two skids for the same model open at the same time.

When a compressor reaches the packing area, its work-in-process tracking label is scanned with a fixed-head scanner, which also queries the company's Scheduling/SQL Database to determine which customer gets the compressor. A nameplate label is created using SATO M84Pro thermal printers. The nameplate is placed on the compressor, and the operator scans that nameplate using an Intermec 2415 wireless hand-held unit to verify the unit is being packed in the right skid.

Phase two allows the packers to do their jobs with confidence, knowing every compressor they add to a skid is the right one. The SMS Group designed the Pack Verify System using its SMS CORE 2000 development system to connect its printers and hand-held scanners to Copeland's database using the 802.11b protocol and Intermec and Cisco equipment. The development system allows connection of a variety of devices from various manufacturers in endless combinations. For example, while upgrading to Intermec 2415s, Copeland continues to use its PSC/Percon Falcon hand-held units with no problems.

This part of the application begins with the Pack Line coordinator determining how many skids are needed to fill an order. The coordinator uses a SATO printer to create a skid license plate label from the company's VisualBasic program. The 4 by 4-inch label contains pertinent order information and a unique 13-character license serial number encoded in a Code 39 bar code. The label is placed on a board given to the packing team.

Team members place the board at the empty skid location and the packing begins. Operators move the first layer of 20 compressors onto the skid and then use the hand-held units to scan the license plate label on the board and each compressor's serial number. The information is compared to the company database to determine that 1) the serial number is valid, 2) the number has not been assigned to another skid and 3) the compressor is being packed on the correct skid. If something doesn't match, the hand-held scanner alerts the operator by switching to an error mode which does not allow any more scanning until the error is corrected.

If everything is in order, operators add a second layer using the same procedure. When finished, operators see a confirmation message on the screen.

The fully packed skid is shrink wrapped, and a "box" label is applied over the wrap. At this point, a final verification is made of all contents on the skid. Operators scan the license plate, model, customer order, sequence, and customer part number information from the skid and compressor labels. If all scanned information matches with the database, then that skid is released to shipping. However, if something is amiss, the system once again alerts the operator that there is a problem.

A useful by-product of this system is that Copeland now has a "birth certificate" for every compressor produced, which includes information such as the time and date each compressor was assembled and serial number generated, all work-in-process (WIP) steps taken, system testing, the skid on which it was packaged, and the customer to which it was shipped. That information is uploaded to Copeland's warranty tracking system, providing a complete picture of each compressor, which is very helpful should a warranty claim arise.

Also, since implementing the system at the Hartselle plant in 1998, the company, while still vigilant, is not nearly as concerned about penalties for errant shipments. An early gap in the system involving stored product in its warehouse was closed, giving Copeland an error-proof process -- the Poka Yoke philosophy at full application. It's also easy to train workers and maintain consistency.

As with most implementations, the toughest day was the first one. Operators were used to searching for compressors with preprinted labels in hand. "Print and apply was a new concept and hard for them to accept," says Dade. "At one point, the operator was running down the conveyor line chasing compressors with nameplate labels stuck up and down both arms! It reminded me of the 'Candy Factory' episode of 'I Love Lucy," he laughs. But operators quickly caught on to how much the new system would help them and have been fans ever since.

System satisfaction has even traveled up the corporate ladder. Though the company originally intended to use the system only at Hartselle, its highest-volume plant, it was so pleased with the results that it implemented the verification system at nearly all of its facilities. The solution is currently being deployed at its plant in Rushville, Indiana.

To say the workers love it would be an understatement. "The plants would never let you take the system away from them," says Dade. "They use that Clint Eastwood line about prying it from their 'cold, dead hands.' Who can blame them? It has cut their return rate to zero."

Part and parcel of that satisfaction is the rugged, reliable SATO printer. "The SATO printers are as dependable, easy to use and rugged as you can ask for," says Dade. "You are supposed to be able to print a half-million inches before needing to replace the print head. We exceed that by a factor of 10 before we have to replace it." As many as 10 SATO M84Pro printers are used specifically for the verification system at each plant, and many plants use SATO printers for other applications as well.

"The M84Pro line is a good little printer — metal case, workhorse, prints well, good speed," says Dave Slagle, account executive for The SMS Group. "We have a lot of them on manufacturing floors, and they run and run and run."

In fact, Dade adds, "All of our equipment seems to have survived well. It takes a beating and keeps on ticking!"

Copeland's great relationship with SMS keeps ticking right along as well. "They have been in our plants, and have helped us with a lot of projects over the years," states Dade. "They understand our business, the fast-paced environment of our plants, and know how to help us solve our problems. They also continue to help us refine the system with enhancements that we need as new, special situations come up, and as new problems develop."

Enhancements are ongoing, as Copeland and The SMS Group continue to evaluate and tweak the system. For example, the system can now be used to pack single compressors and also verify the "remote kits" that must be packed with the compressors. And now that the last plant in this division is going live with Pack Verify, could it be time to look at other divisions and determine how they might take this experience and replicate it worldwide? "Perhaps," says Dade. "That might be a good idea."

Till then, the Poka Yoke philosophy hovers over Lucy, Ethel and the rest of the workers keeping a calm hand on the frenetic productivity at Copeland.