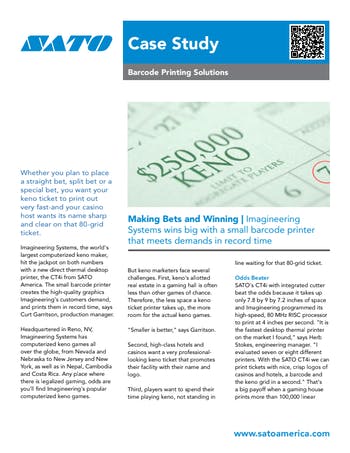 Whether you plan to place a straight bet, split bet or a special bet, you want your keno ticket to print out very fast-and your casino host wants its name sharp and clear on that 80-grid ticket.

But keno marketers face several challenges. First, keno's allotted real estate in a gaming hall is often less than other games of chance. Therefore, the less space a keno ticket printer takes up, the more room for the actual keno games.

Second, high-class hotels and casinos want a very professionallooking keno ticket that promotes their facility with their name and logo

Third, players want to spend their time playing keno, not standing in line waiting for that 80-grid ticket.

SATO's CT4i with integrated cutter beat the odds because it takes up only 7.8 by 9 by 7.2 inches of space and Imagineering programmed its high-speed, 80 MHz RISC processor to print at 4 inches per second. "It is the fastest desktop thermal printer on the market I found," says Herb Stokes, engineering manager. "I evaluated seven or eight different printers. With the SATO CT4i we can print tickets with nice, crisp logos of casinos and hotels, a barcode and the keno grid in a second." That's a big payoff when a gaming house prints more than 100,000 linear inches per month of 4.25-inch by 6-inch tickets-per printer.

Imagineering also needed printers that would talk with its customized POS terminals that don't use DOS or Windows systems. Stokes simply used the printer's programming module to determine how the units could communicate with each other.

SATO's printer also is a big winner with its 1 MB of memory. Each ticket requires 400,000 bytes of graphics stored in the printer for logos, etc. "We store the graphics of our specialized 4- by 6-inch receipt in the printer's battery-backed memory indefinitely," says Stokes. "It can store and print data without holding up the POS (point-of-sale) terminal. Once a customer has indicated his keno marks, the POS terminal tells the printer to recall the stored data and adds the new customer selections. Then it commands the CT4i Series to print, feed and cut the ticket."

"Most printers have to spend time formatting graphics into a printer's image buffer. This one formats almost instantaneously," Stokes says.

Other plus marks that helped win over Stokes are the CT4i's easy paper loading feature, ability to handle Imagineering's 4.25-inch wide tickets and ability to have both serial and parallel ports.

The parallel printer port is standard, but if you order a serial port, you get it as an addition, explains Stokes. "If you have a POS terminal that does parallel and serial, you can use the same printer simultaneously; you don't need to order another option. It's the only desktop I'm aware of that does this," he says.

The CT4i's clear and sharp printing is not only a benefit to the brand-name recognition needs of casinos, hotels and Indian reservation gaming houses, it also ensures highquality barcodes and resulting high first-scan read rates. The barcodes, in UPC-A symbology, are scanned at the POS terminal when the customer says he has a winner. Scanning verifies the winning ticket with the computerized terminal's records and the POS system authorizes payment. Imagineering's auditing system tracks how much is in the keno operator's drawer, how much is played, how much is paid out, all in real time, says Garritson. The result is a complete package.

While small in size, SATO's high-speed CT4i desktop printer is winning the challenges facing Imagineering Systems-both ones put on it by keno players placing bets and those making a percentage from them.